Welcome to Opposite World where right is wrong, and up is down:

For several decades they produced research showing that asbestos was safe and did not cause cancer. For decades they did not restrict the use of lead in house paint until the 1970s even though it was identified in 1949 to be a risk to children from chipping and peeling in poor maintained homes. During the 1940s and 1950s most Americans (including doctors) smoked but there were rising public concerns about the possible health risks of tobacco. In response, cigarette manufacturers heavily marketed their products stating otherwise. Tobacco companies concerned about falling sales released newspaper editorials, magazine spreads and even television adverts featuring images of medical professionals to imply that doctors endorsed smoking and thus reassure consumers that their products were safe.

The same goes for Fluoride.

This theory of helping with dental hygiene is built off of assumptions and not science. Currently, there is no evidence to suggest water fluoridation helps prevent tooth decay.

Why is it illegal to dump fluoride into our lakes and rivers, but somehow it is ok to put in our drinking water and toothpaste? Or why does toothpaste carry a warning, but fluoridated water does not? And why is Sodium Fluoride one of the main ingredients in rat poisoning?

Also to those who heard the myth of Adolf Hitler using water fluoridation in concentration camps to make the prisoners docile, this is NOT TRUE and has been debunked. We must beware of what we see floating around on the internet and being reported by the “truther” gurus as “fact”.

Fluoride is still defended today for two reasons:  the massive profit produced by selling it to local municipalities, and the massive liability and lawsuits that would follow an admission that it is in fact toxic and harmful.

Since April 7, 1997 the United States FDA (Food & Drug Administration)  has required all fluoride toothpaste sold in the U.S. carry a poison warning on the label: “WARNING: Keep out of reach of children under 6 years of age. If you accidentally swallow more than used for brushing, seek professional help or call a poison control center immediately.”

It is really a shame people can’t just trust the “experts” and our government to put human lives above profits.

Solution to this madness?

Solution #1: Don’t worry about it knowing there aren’t any health risks to it, but being aware that there are a lot of things we find out later in life that really do have health risks.

Solution #2: Buy a Distiller or Reverse Osmosis filtration systems to remove 99% of all contaminants including fluoride, chlorine, lead, bacteria and other toxins from your tap water; giving you pure, clean H2O.  Pitcher and faucet mounted filters do not remove fluoride, neither do fridge water filters, only distillers and select reverse osmosis filters do.

On May 22, 2013, the good voters of Portland, Oregon have once again rejected plans to add fluoride to their water to combat tooth decay, keeping it the biggest American city without fluoridation.  The city voted 60% to 40% to stay fluoride-free last night, the fourth such rejection since 1956, Oregonian.  Fluoridation passed a vote in 1978, but the decision was overturned two years later before any fluoride was added to the water, the AP reports.

1. Most developed countries do not fluoridate their water. More people drink fluoridated water in the US alone than in the rest of the world combined. In Western Europe, for instance, 98 percent has now rejected water fluoridation.

The decline in tooth decay the US has experienced over the last 60 years, which is often attributed to fluoridated water, has likewise occurred in all developed countries—most of which do not fluoridate their water.

3. Fluoride affects many tissues in your body besides your teeth. Many assume that the fluoride in drinking water (or in any other fluoride supplement) will somehow only affect your teeth.

But according to a 500-page scientific review,6 fluoride is an endocrine disruptor that can affect your bones, brain, thyroid gland, pineal gland and even your blood sugar levels. At present, 42 human studies7 have linked moderately high fluoride exposures with reduced intelligence, and over 100 animal studies have shown that fluoride exposure can cause brain damage.

Most striking among these are 30 (out of a total of 32 investigations) that have shown that fluoride lowered the ability of animals to learn and remember. Studies have also demonstrated that fluoride toxicity, caused by overexposure, can lead to a wide variety of health problems, including:

Inactivates 62 enzymes and inhibits more than 100

4. Fluoridation is not a "natural" process. While fluoride is naturally occurring in some areas, leading to "naturally" high levels in certain water supplies, this does not make such water safe to drink!

In fact, certain communities with naturally high levels of fluoride in their drinking water are known to have higher rates of health problems associated with fluoride overexposure, such as bone deformities.

Arsenic and heavy metals also occur naturally in the environment, but are still considered water contaminants that must be filtered out in order to ensure safe drinking water. Fluoridation advocates often use the "naturally-occurring fluoride" argument as support for its safety, but clearly such an argument falls flat if you just stop and think about it for a moment.

Moreover, the fluoride added to most water supplies is not the naturally occurring variety but rather fluorosilicic acid—a toxic waste chemical captured in air pollution control devices of the phosphate fertilizer industry. This captured fluoride acid is typically highly contaminated, which may impose additional risks to those already presented by natural fluorides. Elevated arsenic levels, for example, present an increased cancer risk. The fluoride acid may also, under some conditions, increase erosion of lead from old pipes, which presents an added neurotoxic hazard.

A better view of nature’s take on fluoride is the level of fluoride delivered in mothers’ milk. This is remarkably low (averaging 0.004 ppm, NRC, 200, p.40). There is every reason to believe that nature is protecting the baby from the biologically active fluoride ion. Water fluoridation subverts that protection. A bottle fed baby in a fluoridated community is getting about 200 times more fluoride than nature intended.

5. More than 40 percent of American teens show visible signs of fluoride overexposure. According to the US Centers for Disease Control and Prevention (CDC), 41 percent of American children between the ages of 12 and 14 have dental fluorosis.8Outwardly visual signs of this condition include pitting and discoloration of your teeth, caused by long-term ingestion of fluoride during early tooth formation. In some areas, fluorosis rates are as high as 70-80 percent, with some children suffering from advanced forms.

Dental fluorosis is not "just cosmetic." It can also be an indication that the rest of your body, such as your bones and internal organs, including your brain, have been overexposed to fluoride as well—you just cannot see the damage in the same way you can see the effects on your teeth. So there's a high likelihood that if fluoride is having a visually detrimental effect on the surface of your teeth, it's also damaging other parts of your body, such as your bones...

6. For infants, fluoridated water provides no benefits, only risks. Infants who consume formula made with fluoridated tap water may consume up to 1,200 micrograms of fluoride, or about 100 times more than the recommended amounts. Such excessive fluoride exposure during infancy provides no known advantage to teeth. On the contrary, evidence suggests it could cause significant harm.

Babies given fluoridated water in their formula are not only more likely to develop dental fluorosis, but may also have reduced IQ scores. In fact, a 2012 Harvard University meta-analysis funded by the National Institutes of Health (NIH) concluded that children who live in areas with highly fluoridated water have "significantly lower" IQ scores than those who live in low fluoride areas. A number of prominent dental researchers now advise that parents should avoid using fluoridated water to reconstitute baby formula.

8. Fluoride is the only drug added to public water supplies. Fluoride is added to drinking water to prevent a disease (tooth decay), and as such becomes a drug by FDA definition. While proponents claim this is no different than adding vitamin D to milk, fluoride is not an essential nutrient. Water fluoridation is a form of mass medication that denies you the right to informed consent.

9. Swallowing fluoride provides little benefit to teeth. It is now widely recognized that fluoride's only justifiable benefit comes from topical contact with teeth. Even the CDC has acknowledged this fact, and even here scientists have raised questions about its efficacy, as discussed earlier. What is clear though is that ingesting fluoride offers little, if any, benefit to your teeth.

10. Already disadvantaged communities are disproportionally harmed by water fluoridation. Fluoride toxicity is exacerbated by conditions that occur much more frequently in low-income areas. This includes nutrient deficiencies, infant formula consumption, kidney disease, and diabetes. African American and Mexican American children have significantly higher rates of dental fluorosis, and many low-income urban communities also have severe oral health crises, despite decades of water fluoridation. The very last children in the US that need their IQ lowered are children from disadvantaged families (the main target for fluoridation) as in this respect they already have too many strikes against them 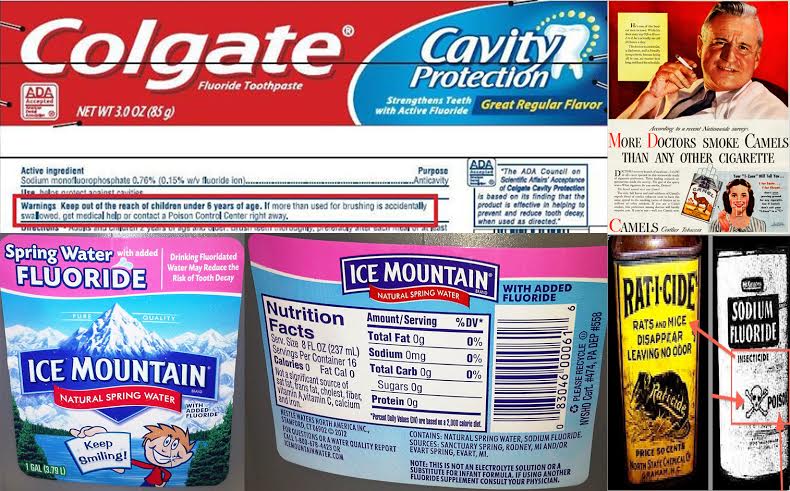